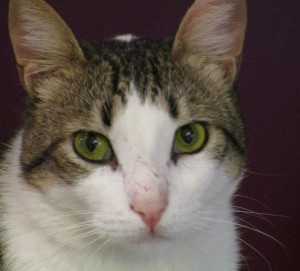 A few weeks ago, after my dear old cat died, I looked for a new one. Enter BosBos (pronounced BoesBoes), almost two years old. Half Egyptian Mau and half Arabian Mau, he suffered abuse in the streets of Egypt before being flown to an Egyptian cat rescue last year. Now, as a newcomer to West Hartford, he is teaching me about violence, safety, and priorities. Since trauma affects humans and cats in many of the same ways, what I am learning is stuff I can use any time I see frightened, anxious people.