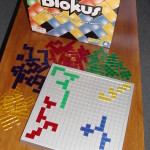 Throughout history, games have offered people relief from the stresses of the everyday world.  Play lets you fool around and have fun in a make-believe universe where risks and consequences aren’t a problem.  Good games also have some not-so-obvious benefits.

I’m not talking about computer games that you play alone, with a Wii, or with unseen people who may be anywhere in the world. I mean portable low-tech games that come in a box and have physical parts. In some ways they offer opportunities that just can’t be beat.

Board and card games promote social interaction, because players generally sit face to face. These games can be lighthearted and humorous. They strengthen ties as people engage with one another and have fun together. They travel easily.

Games ease social tensions as players agree on rules, show good sportsmanship, and match wits. They can also facilitate serious conversation by making an encounter seem less serious and stressful and less confrontational than it otherwise might.

Unlike games of chance, favored by children but often boring for adults, strategy games can challenge people of all ages. Many take half an hour or less to play.

To better your chances of winning, you must bend your brain in different ways. Contrast Blokus with Abalone. The need to try out novel approaches to problem solving may get your creative juices flowing and force you to dust off forgotten skills.

Games promote health. The work involved in solving a puzzle improves memory. Skillful play generally has a soothing effect.  Think of how you felt when you got a seven-letter word in Scrabble. The sense of mastery feels like Valium in an age of anxiety. Laughter, a natural part of many games, relaxes people.

Some games provide relief from real-world distress. Monopoly originally let people escape from the financial hardships of the Great Depression by pretending that they were rich. Fantasy role plays invite participants to imagine that they are gods or are endowed with magical powers.

Competitive games—chess, for instance—allow rivals to duke it out without bloodshed. Diplomacy and Risk, which take many hours to play, reproduce the world in hypothetical microcosm, so that participants can experiment with solutions to different international problems.

Some excellent games appear below. You should be able to find them easily in stores or online. 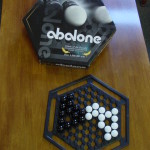 Two players take turns pushing each other’s marbles, in sets of three, two, or one, off the board.  Play requires participants to analyze the board in all directions.

Apples to Apples
A judge shows players a green card, featuring an adjective. In each round players select from their hands a red card with a noun that in their opinion most closely fits the adjective. The judge picks a winner.

Ball and Chain Game
Two groups of prisoners escaping from a bus each try to trap the guard of the opposing group. Prisoners and guards are represented by pairs of wooden balls chained together as they cross the board. 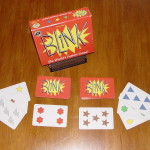 Blink
Two players try to get rid of their cards by playing them onto two piles of face-up cards that share at least one of three features: color, shape, or number.

Blokus
Up to four players try to fit all of their colored pieces onto the square board while preventing other players from doing the same.  The pieces are different configurations of five, four, three, and two squares.  One piece is a single square.

Boggle
Using pencil and paper, players try to make the largest number of words from scrambled contiguous letters on a grid before time runs out.  Points are awarded when a player thinks of words no one else came up with. 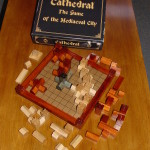 Cathedral
Each of two players tries to claim territory and fit wooden “buildings” into the square town around the cathedral and to prevent their opponent from doing so.

Clue
Advance your token through different rooms in the house shown on the board and try to guess, on the basis of cards in your hand and what you know about the cards of your opponents, who killed Mr. Boddy, in which room, and with which weapon.  This game works best with five or six players.

Connect Four
Beat your opponent by making a row, column, or diagonal line of four checkers in this game, once played by seamen using the slotted lid of a chest.

Gobblet
In a twist on Connect Four, two players “gobble up” each other’s pieces—but if you move a piece that has gobbled, you may sabotage yourself if you have forgotten what’s underneath it. 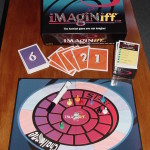 Imaginiff
If Aunt Nelly were a car, what kind would she be? A dump truck, a Model T Ford, a Beetle, or—? The questions on each card are asked about someone everyone else knows, and there are six possible answers. Players who pick the most popular answer advance on the board.

MadGab
This game pits your ears against your eyes. What common word do you hear when you say “Ask rude arrive her”?

Make Five
The “maker” tries to place wooden discs in five rows of one color each; the “breaker” tries to keep it from happening. Then they switch roles.

Mancala
The board looks like an egg carton with the addition of a big hole, or kalah, at each end. Each egg pocket holds three to five stones, which the two players take turns distributing as each tries to capture the other’s stones and thereby get the lion’s share. 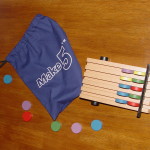 Othello
This update of the nineteenth-century game Reversi has two players sandwiching, and thereby capturing (and flipping), each other’s stones on a square board. It’s hard to tell who will claim the larger amount of territory until the game is almost over.

Pente
A fast-paced version of Go, Pente proclaims as the winner the first person who places five stones in a row or captures ten stones belonging to an opponent.  Like Blink, this game can be played in less than five minutes.

Pit
This hilarious game from the early twentieth century is best when bought with a bell, which the dealer slaps at the start (“the market is open!”) and the winning player slaps at the end (“Corner!”). You try to trade cards with other players until you have all nine cards of one commodity (coffee, oranges, corn, etc.) and a corner on the futures market. 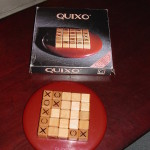 Quarto
This game of four-in-a-row, handsomely designed in wood, makes players choose the pieces to be played by their opponents.

Quixo
In a variation on tic tac toe, players pick one of twenty-five cubes from the board’s edge, turn it to expose an X or an O, and replace it on another edge. The winner is the first to get five in a row.

Quoridor
To win this game, playable by two to four players, you must move your pawn and locate your “fences” so that you cross the board before anyone else does.  Skillful players can win by placing fences so that their opponents are forced to cross the entire board again just as they near the finish line.

Rush Hour
Set up the plastic cars in a traffic jam as shown on a card (four decks are available), and then try to maneuver them so that one central vehicle can drive off the board.  This game can be played by one person or by several people in timed relays. 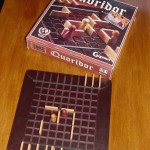 Set
Players try to be the first to identify sets of three cards on which every feature (there are four) is different or every feature is the same. The person finding the greatest number of sets wins.  The challenge is similar to that in Blink (above), but the rules are more complicated.

Stare
An enormous deck of cards reproduces colored posters and other detailed images. Each player studies one card for ten or twenty seconds before another player administers a memory test.