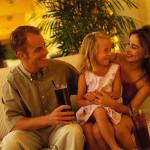 It’s great when parents can correct a young child without provoking tension, conflict, and a power struggle. One way of doing this is to use some form of playful humor to make your point.  Some of the examples below work well in families with several children.  After you have experimented, you may get ideas for other humorous interventions. If so, please share them with me.

Deputies
If your child yells, swears, utters obscenities, and interrupts others when they are speaking, you, Officer Parent, may find it helpful to turn the offender into a (police) deputy. Ideally, deputies should be able to wear a badge (silver star) and should have a pad of tickets similar to those given out for traffic violations.

Whenever a deputy sees a child or grownup committing the offense in question, he is empowered to issue a ticket. A given family with several children might conceivably have several deputies, and of course Headquarters (you) would need to convene a conference to check in with the deputies from time to time regarding the status of offenders.

Dueling Pistols
You need two water pistols, not too large and not too small and not Super Soakers. When conflict between family members seems about to escalate out of control, leap into the fray and say, “There’s only one way to solve this problem. Choose your weapon!” Hand out water pistols, direct the combatants to the backyard, and declare the wettest person the loser. Shelve this intervention when it’s cold outdoors.

Just Chill
If obscenities and swearing are a problem in your family, reach for the ice cubes. Explain at a family meeting that anyone caught using bad language will be required from now on to put an ice cube in her mouth and hold it there, without crunching, until the ice has melted.

Once you have enforced this rule a couple of times you may be able to ask family members whether or not they need to “just chill.” You may get results without leaving your chair.

Masking Tape
You can explain to children that people sometimes joke about wanting to tape shut the mouths of people who habitually make offensive remarks and that while we can’t actually apply the tape, we can mention it.

To facilitate this process, buy several rolls of masking tape and plant them around the house. Then invite anyone who feels hurt or offended by someone else’s words to pick up a roll and wave it.

Red Handed
Impulsive younger children often push, punch, or grab other people in unwelcome ways. To solve this problem, go to the supermarket and buy a pair of the cumbersome rubber gloves that people sometimes wear when they wash dishes.

At a family meeting, indicate which kinds of physical contact you want to eliminate, and prescribe as a consequence ten or twenty minutes spent wearing the rubber gloves without talcum powder (hands become unpleasantly sweaty without talcum powder). The wearer of the gloves is bound to feel silly in short order—and to want free his or her hands.

It is too bad that the gloves don’t come in red, but I think the manufacturer didn’t have this particular use in mind.

Silver Rule
When children have trouble respecting others’ physical space, try establishing a rule that at least twelve inches must separate people from each other.

Driving instructors teach learners to keep a doughnut of space around their cars when they are on the road in order to ensure that they have time to brake or maneuver if need be. By the same token, children need to show and demand respect for personal space.

To facilitate the learning process, you can appoint a deputy (see “Deputies” above) and provide a carpenter’s folding rule (possibly with a pocket or holster). The deputy then becomes responsible for warning anyone whose body violates the boundary. You can call on the deputy for help any time you spot a problem situation in the making.

(You can also have fruitful discussions about exceptions to the rule—for handshakes and hugs, for instance—to develop awareness of social conventions in this area.)

Sign of Empathy
Some children who have a hard time putting themselves in other people’s shoes may routinely engage in insults and name-calling: “You’re fat! You’re ugly! You’re stupid!”

In preparation for this intervention, which can be used at home or at school, you will need a few markers, a few lengths of string, and pieces of poster board or shirt cardboard (lightweight and white on one side), all parked in a central, readily accessible location. The string can be attached to the shirt cardboard with a stapler, or you can tie each end to adjacent corners in which holes have been punched.

Once your supplies are in order, you will explain that anyone who indulges in insults or name-calling must make a sign owning the insult. A child who called someone else fat, ugly, or stupid would make a sign reading: “I am fat,” “I am ugly,” or “I am stupid.” The offender should wear the sign for a while but should not be asked to do so for more than a few hours or one day.

Your point is made when the sign is created, and you may see results when it is worn for as little as a few minutes. Most children will object so strenuously to hanging such a sign around their necks that you will probably need only to mention the intervention from time to time.

Twenty-five-Cent Solution
Many families have a problem behavior that is exhibited at one time or another by almost everyone and that bothers everyone pretty much equally. Examples are yelling, swearing, and the use of foul language.

To use this little trick, you need a large glass jar with a lid. You explain at a family meeting that, from now on, your house is a no-yell zone (or that your home is off limits for bad language) and that anyone caught breaking this rule will be fined and required to pay a set amount of money into the jar.

At the end of the week, the money in the jar must be used for some treat that can be enjoyed by the whole family. The idea is that the bad behavior is an offense against the family and that the treat, financed by the offender, restores good feeling and reaffirms family values.

This intervention appeals to small children because it allows them to point the finger at grownups rather than just vice versa. Fines can be as little as twenty-five cents or as much as one dollar—or you can use raffle tickets for which offenders must pay.

Listen Up
This intervention helps children understand how people feel about loud noise. When unnecessary noise wakes family members too early on a Sunday morning, or when music blares at some other time of day, require the offender to don headphones and listen to music that he or she finds distasteful. A rap aficionado might be required to listen to Beethoven or to opera (you get the idea).

Payday
In some families, one child constantly breaks household rules while another is an angel. Offenders sometimes explain that they have no control over the problem behavior, but you may suspect otherwise.

To test your hypothesis, tell your constituents that you will pay the law-abiding sibling one dollar any time there’s an infraction of the rules. This is an equal opportunity intervention: offenders who have mended their ways can qualify for payment if the angel falls from grace. Most children hate to be deprived of a benefit they see their siblings getting.