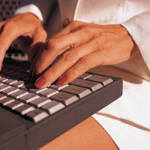 Did you know that your fingers talk to your brain?  They help you process feelings and ideas much as your teeth prepare mouthfuls of food for digestion.

In front of the sofa in my office there is a coffee table with a few things on it, including a geode, a huge pine cone, and the Ball of Whacks, a collection of red pyramid-shaped magnets that can be pulled apart and put back together in many ways. It comes with a small instruction manual.

Roger von Oech, the inventor of the Ball of Whacks, says that when you play with the magnets you stimulate the nerve endings in your fingertips. These sensors connect with points in your brain, so that, according to the inventor, manipulation of the ball facilitates problem solving.

I hope that the Ball of Whacks on my coffee table helps my clients by promoting thought.  Along the same lines, I have recently learned that the act of taking notes longhand must have the same benefit.

My clients know that I scribble while they are talking. There’s nothing mysterious about my notes. I am simply jotting down the gist of what you say so that I can remember later on, if need be, what we talked about. Sometimes my notes remind us both of the ground covered.

Clients occasionally ask for copies of session notes. A few people have wanted the entire record at the end of treatment as a chronicle of our journey together.

Now, medical offices are in the process of “going paperless,” as the lingo has it, which means that most note taking is done nowadays on computers or tablets. Will I follow the trend? No way. I think imposing a monitor or iPad between me and you would somehow attenuate our connection.

Unlike note taking, a tablet would be a barrier. There is some evidence that laptops distract their users from the work at hand. They also invite multitasking, which interferes with performance quality.

In contrast, my pen does not get in the way. Indeed, I think it improves our connection. It tells you that I am listening closely.

But there’s more to my scribbling. The act of writing actually helps me understand what you are saying. Since I don’t write fast enough to down verbatim all of your words, my fingers force me to condense and interpret your meaning.  Researchers investigating the importance of handwriting have found that it stimulates the brain in important ways and can actually help you generate ideas.

Question: would I learn better and remember more if I could commit every one of your words to the paper in front of me? Pam Mueller and Daniel Oppenheimer, psychologists at Princeton University and the University of California, Los Angeles, respectively, actually looked into the question and wrote up their results in the June 2014 issue of Psychological Science (volume 25:6, pp. 1159-1168). Their answer may surprise you.

They found that, comparatively speaking, laptops impair learning when they are used to take notes. They call for shallower intellectual processing, because they invite us to transcribe, whereas longhand note taking requires us to process and reframe information.

Note taking, earlier research suggests, offers two benefits, encoding and “external storage.” The more deeply information is processed intellectually as it is written down, the greater the encoding benefits.

Verbatim note taking leads to poorer performance, especially if where conceptual material is concerned, though everyone agrees that external storage is a benefit. That is, it’s great for me to be able to jog my memory by reviewing my notes from our last session before you come back to see me again.

Mueller and Oppenheimer conducted a study in which Princeton students took notes on TED Talks using either a notebook and pen or a laptop. Not surprisingly, participants who wrote longhand notes used fewer words. The words contained in laptop notes overlapped more with the lecture than did the words in notebooks.

When tested, people who took more notes did better, but people whose notes showed less verbatim overlap also performed better. In other words, performance was influenced most by quantity of notes taken and by verbatim overlap (the less overlap, the better).

In a second study, Mueller and Oppenheimer gave students laptops or pen and paper and advised those with computers to take notes without just writing down what the lecturer said. Interestingly, the students told not to keyboard verbatim notes did so anyway.

If I want my consulting room notes to be the best they can be, then, I should write rather more about what you say, and I am most likely to remember your words if I don’t write them down verbatim.

In a third study by Mueller and Oppenheimer, the effects of external storage were examined to see whether laptops offered an extra benefit in this department. It turned out that yet again longhand notes were superior even though they involved fewer words (and more notes mean better performance on tests).

In conclusion, Mueller and Oppenheimer remark, “synthesizing and summarizing content rather than verbatim transcription can serve as a desirable difficulty toward improved educational outcomes” (p. 1166).

Pen and paper make me think about what I am writing down. Do I become a better, more reflective therapist as a result? I’d like to think so! A safer conclusion might be that the pen is mightier than the sword and also mightier, as a word processor in a lecture situation, than the laptop.

When it comes to writing blog posts, though, the computer probably still has the edge, at least for me.