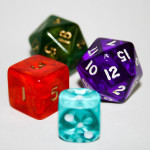 Back in the days when fathers burned autumn leaves after raking them, when schools and churches kept their doors unlocked, and when term papers were produced on typewriters, not all games were packed in plastic and sold in stores.

Sure, you could buy games. But back then, traditional contests calling for no real equipment and adventures you thought up yourself were also good fun. First you had to design the game, then find the raw materials, and finally agree on the rules.

If the game required some preparation, the shared experience of playing was often more intimate and memorable. I think everyone assumed then, too, that games were about socializing–interaction between people. What a far cry from the PlayStations, Xbox, and other isolating technology we have today!

When I was very young, for instance, my father showed me how to play battleship with paper and pencil. He drew two square grids, each fifteen cells on a side, on a mimeograph stencil. He labeled the cells on the left vertical edges with the numbers 1-15 and those along the top horizontal edges with the letters A-O. We played using copies of this “board” that he ran off on a mimeograph machine, which produced a purple image (and purple fingers).  We had no other copiers in those days.

To locate your ships, you traced their shapes in pencil on the lower grid. When your opponent made a guess, you placed an X in the corresponding cell. If you want to play battleship this way, you can draw the grids on paper and photocopy them. Or you can produce the grids as tables in Microsoft Word. When my father went to the trouble of making a game for us to play, I knew that the time we spent together was important to him.

Many games for sale in stores can be played without spending money. Examples include Scattergories, Outburst, Hangman, and Mancala. Other fine traditional games have never hit store shelves at all. You can experiment with the suggestions below. All you need is a paper bag or small box, pencils, paper, index cards, scissors, a dictionary, household odds and ends, and some brainpower.

Family Pursuit. A variant of Trivial Pursuit, this game uses index cards or quarter-sheet pieces of paper. Every person in the family is given a dozen or more numbered cards and is asked to write a question about family lore on the card. The writer is also asked to supply the numbered answers on a separate sheet. Players are then scored on the number of correct answers they get. As you can imagine, this game works best for large families (or family reunions).

Charades. Competitive charades call for two teams of players. Playes write down on snippets of paper simple catchphrases or the titles of books, songs, movies, or plays (almost any known expression will do). The pieces of paper are then folded and dropped in a bag or box. One team member is selected to draw from the bag and pantomime the phrase for teammates within a set period of time. Teammates call out their guess until time runs out. When everyone has had a turn, the game is over. For an overview of the gestures and signals used in the game, go to Wikipedia. It is also possible to play without teams, scoring on speed alone. In either case, the more players the merrier.

Dictionary. For this game you need pencils, paper, and a dictionary. One player, the “reader,” finds, pronounces, and spells out loud a word in the dictionary that no one knows. This player then writes down a true meaning of this word, while the other players write down made-up meanings. The definitions are mixed up and read aloud by the reader, and the players vote on the correct one. Each player who guesses the correct meaning receives two points. Each player also gets one point every time someone votes for his or her definition. This game calls for at least four people.

Scavenger Hunt. Scavenger hunts–great fun for teams of two to six children or adults—require advance preparation. You are not collecting objects but searching for answers to questions about places and sights, indoors or outside, around your house or in some public place, perhaps a museum or a park. Each person receives a set of written clues and questions, and sometimes the team receives a map. You have a limited amount of time—usually two hours or 90 minutes—to answer as many questions as possible. You earn points for each correct answer, and the team with the most points wins! At the end of the trail there should be some sort of reward or prize.

Family Jeopardy. This game is similar to the television Jeopardy. Where several generations are present, the older generations can prepare the questions for the younger and vice versa. The questions can involve common knowledge, local or family lore, and basic skills (such as the times tables).

Story Sack. Story sacks are good when young children (age six and up) are present. Prior to game play, an adult assembles sacks, one for each child or one for each team (two to four children). Each sack should contain about five randomly chosen commonplace household items—perhaps a toothbrush, a screwdriver, a pack of cards, a bottle of glue, a candle, or anything else that strikes your fancy. Each player or team is then challenged to act out a skit or to tell a story that uses all of the items in the sack. The audience can vote on each skit or not, as you choose (games don’t always need to have winners and losers).

Cue Cards. For children who know how to read, cue cards can work like “story sack”: they can list people, things, and even phrases that players must incorporate into a story invented on the spot. A variant can invite people to describe memories—their best birthday, the worst storm ever, the best teacher ever. If the game is played by parents and children and the cards ask open-ended questions about shared experiences, the game works to strengthen family bonds.

With this start, you can create homemade versions of store-bought games.  Even better, you can invite your children to improve on the basic model.  Best of all, you can challenge everyone in the family to invent a brand new game and to think about the qualities that make some games more fun to play than others.